3 ring systems on base rigs are rarely used under load, I suppose for the majority of jumpers, me included, it’s mostly used for switching canopies and the occasional planned water landing, where in both cases theres barely any tension on the risers. But even if you’re not doing any cutaway shenanigans, you expect the 3 ring to do its job properly when under load for those oh-shit moments like landing in moving water, so you should keep it in good condition.

I don’t want to go into detail with the whole 3 ring maintenance thing, I want to focus on one particular issue with the cutaway handles since it can be easily overlooked when checking a 3 ring setup.

Theres a nicopress sleeve clamping together both sides of the yellow cable forming a loop where handle is attached. This sleeve has to be properly set to prevent any cable slippage. 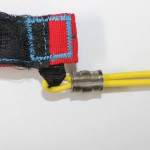 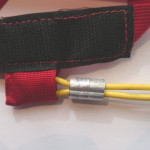 If the nicopress sleeve isn’t properly pressed and one side experiences more pull force than the other, which is likely due to longer housing and the more complicated routing on the left side, it could happen on a cutaway that only one riser releases and the cutaway handle slips off the cable, while the other riser will stay attached to the rig.

The nicopress sleeve on this handle wasn’t properly pressed, and the most force is required to move the bent in the cable around the tape with which it is attached to the handle, after that it just slips through. The force required is surprisingly low with this particular handle.

As Sketchy Andy demonstrated this can actually happen in real life and puts you in a very bad spot.

So include the cutaway handle in the next gear check, if you can make the cable slip by pulling on one side with your bare hands go to a rigger to get the sleeve properly pressed.