Slider down vs. Slider off

On one of my recent slider down jumps I had a 180 and encountered an issue with the slider that I never really thought about or realized before – grabbing the slider together with a backriser.

Here’s just a brief summary of the pros and cons of slider down and slider off configurations, scroll down to the video for the jump and my analysis.

Slider down means leaving the slider on and securing it to one of the risers, while slider off means that the slider is taken off the rig entirely.

Slider off configuration reduces the anhedral angle of the canopy a bit and makes it glide and flare slightly better. Also packing will be a bit cleaner and faster since its one component less to take care of. The downside is that reconfiguration from slider off to slider up and vice versa takes longer, requires tools, and introduces the chance of misrigging.
Slider down makes it a lot quicker to switch from slider up to slider down and vice versa without any tools required and less opportunities for misrigging. On the other hand, packing takes a minute or two longer because you have to take care of the slider and stow it properly.

There are a few things that I fucked up there, first, I grabbed the backriser too low, limiting the amount of steering input I could apply, and second, I got some portion of the slider in my hand, giving me an unusual feeling of steering pressure at some point because I was also pulling on the front riser via the slider and further limiting the turnrate I could achieve. When I realized that I got my hand on the riser too low and I’m not turning as quick as I would have liked to I shortly thought about going to toggles but ditched the idea because I was too close and was afraid that releasing an grabbing again would surge me into the cliff face. So I used my left hand to apply further input on the right riser to turn faster.
After completing the turn I knew that I felt the slider in my hand during the maneuver but until watching the footage I was not fully aware of what exactly I got in my hand there and when it popped out of my grip, as well as that my hand was in the toggle. Also there was a slight side wind coming from right as seen from the top. I did the evasive turn towards the right because it didn’t feel like a 180, more like 120-140, most likely due to me being spun round in that direction. This led me to turn downwind moving along the wall during the maneuver, while turning the other way would probably would have turned me nicer on the spot. Although I honestly don’t know if a riser-stall-turn has higher turnrate turning into or away from winddirection right after opening. (I will give it a few tries at the bridge and update this article.)

And finally, my learnings from this jump:

For matter of completeness, heres how I stow my slider for slider down jumps. 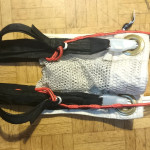 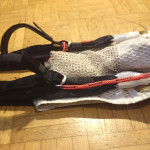 4 Responses to Slider down vs. Slider off